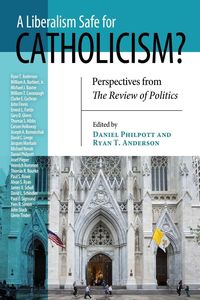 A Liberalism Safe for Catholicism? Editors Daniel Philpott and Ryan Anderson chronicle the relationship between the Catholic Church and American liberalism as told through twenty-seven essays selected from the history of the Review of Politics, dating back to the journal’s founding in 1939. The primary subject addressed in these essays is the development of a Catholic political liberalism in response to the democratic environment of nineteenth- and twentieth-century America. Works by Jacques Maritain, Heinrich Rommen, and Yves R. Simon forge the case for the compatibility of Catholicism and American liberal institutions, including the civic right of religious freedom.

The conversation continues through recent decades, when a number of Catholic philosophers called into question the partnership between Christianity and American liberalism and were debated by others who rejoined with a strenuous defense of the partnership.

The book also covers a wide range of other topics, including democracy, free market economics, the common good, human rights, international politics, and the thought of John Henry Newman, John Courtney Murray, and Alasdair MacIntyre, as well as some of the most prominent Catholic thinkers of the last century, among them John Finnis, Michael Novak, and William T. Cavanaugh.

This book will be of special interest to students and scholars of political science, journalists and policymakers, church leaders, and everyday Catholics trying to make sense of Christianity in modern society. 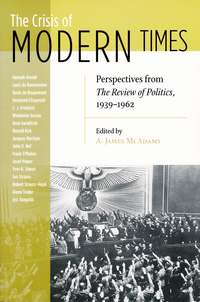 Individually and collectively, they maintained that the West could be saved only if its leaders embraced the idea that society should be governed by moral standards and a commitment to human dignity. The Crisis of Modern Times "Perspectives from The Review of Politics, 1939–1962" Edited by A. James McAdams In the 1940s and 1950s The Review of Politics, under the dynamic leadership of Waldemar Gurian, emerged as one of the leading journals of political and social theory in the United States. This volume celebrates that legacy by bringing together classic essays by a remarkable group of American and European émigré intellectuals, among them Jacques Maritain, Hannah Arendt, Josef Pieper, Eric Voegelin, and Yves Simon. For these writers, the emergence of new dictatorial regimes in Germany and Russia and the looming threat of another, even more devastating, European war demanded that one rethink the reigning philosophical perspectives of the time. In their view, the western world had lost sight of its founding principles.

Since the first issue appeared in 1939, The Review of Politics has influenced generations of political theorists. To complement these essays A. James McAdams has written an introduction that discusses the history of the journal and reflects on the contributions of these influential figures. He underscores the continuing relevance of these essays in assessing contemporary issues. 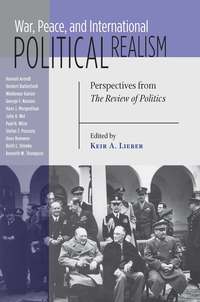 Esays by: Hannah Arendt, Herbert Butterfield, Waldemar Gurian, George F. Kennan, Hans J. Morgenthau, John U. Nef, Paul H. Nitze, Stefan T. Possony, Hans Rommen, Keith L. Shimko, Kenneth W. Thompson War, Peace, and International Political Realism "Perspectives from The Review of Politics" Edited by Keir A. Lieber Gathering together essays by some of the most influential modern political philosophers and theorists, War, Peace, and International Political Realism reveals the twentieth-century roots of the realist tradition and demonstrates the enduring relevance of realist insights for current international relations scholarship and foreign affairs. These essays, all of which were published in The Review of Politics, the majority during the 1940s and 1950s, reflect four major tenets of the classical realist tradition: an obligation to confront large and difficult questions about international politics, a recognition of the fundamentally tragic nature of relations among humans and states, a rejection of historical optimism, and a belief in practical morality. Keir A. Lieber provides an excellent introduction emphasizing the importance of political realism as defined by the contributors.