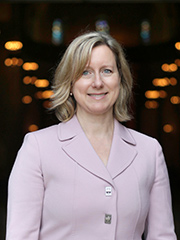 Professor Denise Schaeffer earned her B.A. from Sarah Lawrence College and her M.A. and Ph.D. in political philosophy from Fordham University. She joined the Holy Cross Department of Political Science in 1995; she was promoted to associate professor in 2002 and professor in 2013.  In addition to teaching a variety of courses in the political science department, Schaeffer has taught a number of first-year seminars and served as an advisor on many honors theses and Washington Semester theses. She has served on several college-wide committees and chaired the Political Science department from 2006 to 2009.  She was Director of Montserrat from 2010 to 2014. Schaeffer has authored, co-authored, or co-edited numerous scholarly publications in the field of political philosophy, including, most recently, Rousseau on Education, Freedom, and Judgment (Penn State University Press, 2013).  In 2014, she received the College’s Mary Louise Marfuggi Faculty Award for Outstanding Scholarship.